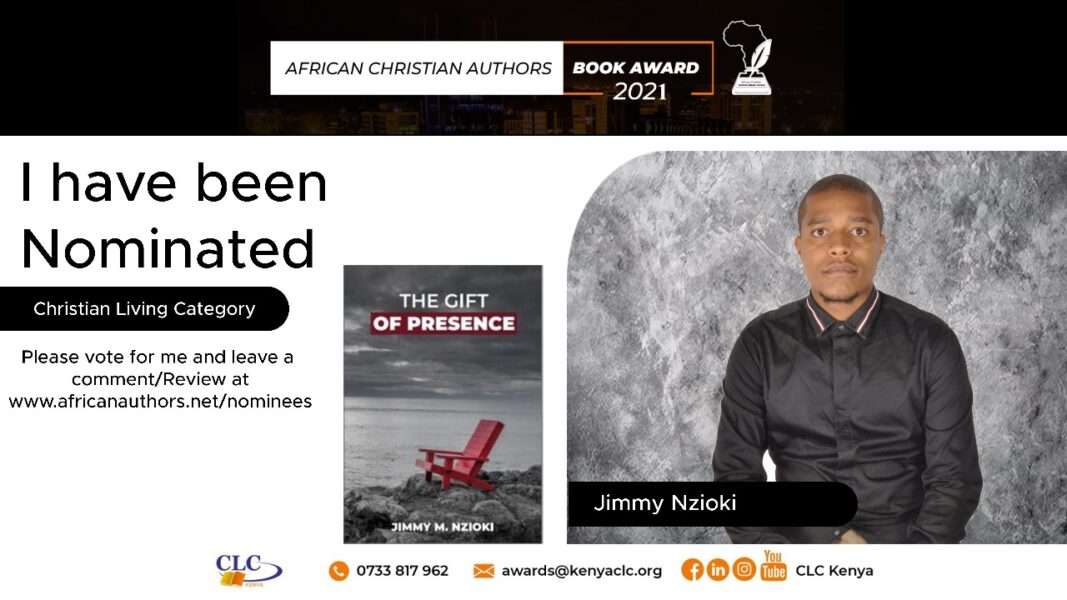 My name is Jimmy Nzioki, a student at Jomo Kenyatta University of Agriculture & Technology pursuing a Bachelor’s degree in Electrical and Electronics Engineering at the Main Campus in Juja. Besides that, I’m also a Christian and a teacher of the Word. By God’s enablement, I’ve been able to write four books and 3 have been published and the latest one is currently in the pipeline. The first two titles were related in the sense that one was my academic memoir from primary till the end of my High School and the second book was a short book that was written primarily for candidates both in upper primary & High school as a motivational title with quick pieces of advice for them since they’ve limited time in poring through a lot of pages to find help.

The first book is titled “Genius Is Made Not Born” (2015) and the second one is called “The Parapet” (2018). The third title, “The Gift of Presence” was a major shift from the first two books as this one was centered on God’s presence as well as fellow man’s presence in our daily lives. The book was published at the heat of the pandemic last year when all learning institutions had been closed for several months.

The Gift of Presence

My writing journey began immediately after finishing high school in December of 2014. I felt a conviction from the Holy Spirit to put down in writing both my academic as well as my spiritual journey up to that point in my life. So I dedicated a minimum of two hours daily for nearly 2-3 months consecutively to writing the manuscript. At the time I’d been encouraged by my dad to take up a Certified Public Accounts course as I waited to join campus. I enrolled for section I in January. My parents thought that I was busy studying for CPA every night as I spent quite some time alone in the study room but in an actual sense I was busy putting my manuscript together day after day.

I know at this point one may wonder whether I was focused on finishing up the first CPA section(which I eventually did but after a gruesome and rigorous study time a month to the CPA exam). To the parents here, you can never be 100% sure what your teenager is up to when they spend quite some time alone in their rooms. Great things might be happening or sadly the converse is also true but I digress. Eventually, after three months I had almost three A4 exercise books filled up with my story and that’s when I decided to break the news to them of what I’d been up to. My parents were simply amazed when I told them that I wanted to publish the manuscript into a book. Their support was quite overwhelming and I thank God for having granted me such parents.

To cut a long story short, the book got published a couple of weeks after the release of KCSE results. It couldn’t have come at a better time, as it gave me an opportunity to do a couple of motivational talks in various primary and secondary schools. In a manner of speaking, I gained a short-term career before joining the university.

The first book had a lot of issues with the kind of workmanship that went into it (which was my first major lesson in the school of hard-knocks on Self-publishing) but by God’s help, it still sold almost 85% of my overall stock. I attribute it to God’s favor and providence. I remember a day I sold 70 copies in a span of about three hours during my primary school’s academic day. Fast forward a couple of years later and the pandemic hit us hard and once more the inspiration to write came again so strongly until I wrote and went through the whole publishing process in a span of around 2-3 months (yes I know that might not be common but it happened as things were going on concurrently). From an article I’d published on a friend’s blog back in 2018 with the same title “The Gift of Presence” and was slowly gathering dust on my hard drive disk, I picked up that dry bone and added some flesh to it and voila out came a book.

The book is now available as an ebook on Amazon and BooksformySoul as well as a hardcopy at Keswick Bookshop and Chania Bookshop along Moi Avenue.

THE GIFT OF PRESENCE https://booksformysoul.com/product/the-gift-of-presence/

THE GIFT OF PRESENCE https://www.amazon.com/dp/B091CL6GC6/ref=cm_sw_r_wa_awdb_PZWQ8WK0SCVPJJYQ58M9

You can find me on the following platforms: