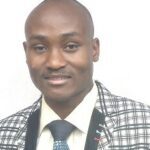 I conceived the idea of becoming a writer while helping others
My name is Antony Nbita. I’m a born-again Christian. I was lucky to be born again after my form four-three months before going to college where I served God as a fellowship chairperson. God has been faithful in my life, The day I was born many thought I won’t live but He was faithful as I was born seven months of pregnancy and survived by a whisker. After being brought up by a single mum, I appreciate the role women does in this world.

I never knew I will be a writer. The idea was conceived in my mind when I completed form four, aged 18. Out of the curiosity of trying to be of help to students in a certain school I was teaching, I discovered my niche of writing. It was one of the strangest of ways. After my fourth form having gotten one of the most desired grades, I got an opportunity to help students in a school in our neighbourhood.

Even though the school was one of the oldest schools in the community, passing national exams by students was one of the rare miracles that could have happened. Now that I was there, it became a burden to me and I lacked peace. Long story short, I went to the principal, requested him if I could write a piece of advice to every student in the school proving to them why there is no excuse for failure. I printed two pages of advice and pinned them in the classes and notice boards. Later an idea struck me. I decided to write enough advice which became an A4 booklet worth 24 pages and I had it bound. I gave it the title ‘No Excuses For Failure’.

I gave the booklets to the students free of charge. I later started moving from one class to the other advising students how they can make it, and there is no excuse for failure. Before I left the school to college, many students had their attitude and performance changed.

Inspiration in my book
While in my third year of campus I changed the title from ‘No excuse to failure’ to ‘Coming Out To Zero In School’. It is a book for students in high school and higher institutions of learning, guardians, teachers, and anyone who wants to live a well-rounded life. It is a custom-made book addressing the problems that have now visited institutions of learning- there is a chapter talking about how to live an unregretful life in high school and colleges, real stories of campus life. The book also gives full disclosure of why some people who think they are failures are not but uninspired talented guys. The book also talks about the role of God and moral values in academic performance. And finally, it gives 31 tips for an A+ student.

I request you to Click on this link and Press VOTE, scroll down & leave comments for my book that was nominated for the ACABA award: https://africanauthors.net/nominee/public-speaking-body-language-skills/