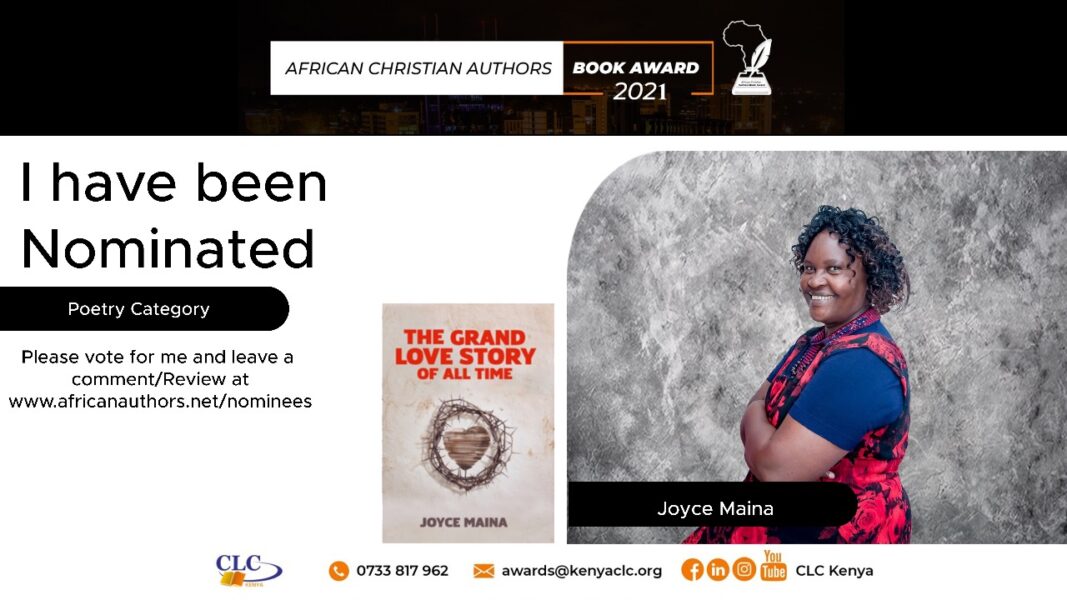 My Writing Journey
My name is Joyce Maina, the author of the book ” The Grand Love Story Of All Time”, When I was in form three, fifty-five years ago we were doing English Literature with Sister Stella in Huruma High School, Nairobi. The set book was Julius Caesar by William Shakespeare. That was my first encounter with poetry, I fell in love with it and promised myself that one day, I will be a writer of poetry. Sister Stella also told me that I would be a writer in my later life.

One month before sitting for my form four exam, I went home to Murang’a. I told my grandmother to pray for me so that I pass my exam. That would qualify me to join forms 5 and 6 and then to the University of Nairobi – the only university in Kenya at that time. It was a serious issue that needed a fervent prayer. My grandmother used to pray day and night; that was her business. She did it diligently even though she was bedridden and blind. She was a great worshiper, all by herself in bed with the loudest voice in that area.

This is how she prayed for me, “Almighty Father, Lord God in heaven, help this child to get the wisdom of God and not the wisdom of the pen; in the name of Jesus Christ amen”. I did not say amen, but rather I told her to pray again for my exam. She said she has finished praying. That made me angry, and I told her so; having gone all the way from Nairobi for nothing.

The book that I have just written is about the Love of God in Christ Jesus, which is the wisdom of God. Even though she is long dead, my book is the outright answer to her prayer which I foolishly rejected. God is so faithful, He is so good, so loving, and so forgiving. At His feet I fall prostrate, saying thank You Lord, for receiving me, just the way I am: coming home from a far country, where I have been feeding pigs and eating their food – the prodigal son.

Lest I withhold necessary information, I never imagined that I would ever write a Christian book. I never attended a Bible School and have never preached although I go to Church. I also intercede as instructed by the Holy Spirit, anywhere and anytime. As far as possible, I attend night vigils for prayers.

The accident that infused my writing
I started my teaching career as a Maths teacher in a Secondary School, then a Secretarial teacher, then a Hotel Correspondence teacher, and retired as a Communication Lecturer. What I knew all along is that I must write a book; to tell the world that God healed me miraculously when I suffered a very bad car accident 46 years ago.

It was a head-on collision. Both cars were complete wrecks. I was seated next to the driver, then the loud bang crushed. My unborn baby (eight months) started kicking with feet and fists. He fought hard. I was busy protecting him, the best way I could. Then he could not fight anymore. My belly went quiet, then I breathed his life out of my nose. I knew I had lost him. That made me very angry at God. I asked Him where was His mercy that people talk about. Why punish such a small baby? How come He could not protect Him. What sin had he done in my stomach?

Good Samaritans came and separated the two crushed cars and took us to Nairobi Hospital. That is where I got to know that my heart had a major injury and was pouring my blood through every outlet except my ears. My veins had collapsed, so I could not receive any blood. My uterus was so swollen with my dead baby. It was like a mountain, my chest had a major injury, my spine was in pieces, my stomach organs were badly damaged. I Was still fighting God about my baby. So there, in the ICU of Nairobi Hospital, the doctors did not know what to do. They told the gynecologist to remove the baby through an operation. He said I could not survive the operation and the baby could not push his way out. I could not push him out either. It was a hopeless case even though I did not die. They made me teaching apparatus in the ICU. After students studied the heart or other body organs they came to do practicals on me. I was so angry, I asked God why He had no mercy enough to kill me. I said terrible things, reserving nothing.

That is where Jesus came for me, in that hopelessness. His love for me is so graceful so healing and so saving. After this encounter with Jesus, I received the strength to push out my dead baby. My gynecologist said the baby had a very bad head injury. So he opened my uterus to patch it because it was badly torn. He also said it can never carry a baby to maturity. Therefore we should not get other children thereafter. We should be satisfied with our firstborn son (the dead one was the second born). That was 1975, I rested in 1976, and In 1977, I got a second son. In 1980, I got a daughter and in 1983, I got a third son. They are all grown-ups with their families. Besides, I am a healthy woman of 72 years. It is not boasting but it is glorifying God for His mercy, goodness, love, grace, faithfulness and the list is endless. It is knowing God as He is, and also realizing what I am without God.

God healed me so miraculously, the doctors were shocked. I am overwhelmed by what God did for me. I was so far from the kingdom of God. In His mercy, He brought me to the banqueting house, and His banner over me is Love.

Calling authorship to action
I want the world to know that Jesus will get you wherever you may be. That is the book I planned to write but Jesus had a better idea that I write a book with Him as the Main Character, the Center, and the theme. I am overwhelmed by how God took full control over me and made my book gospel centrered instead of accident-centrered. Sometimes back in 2018, I visited my sister Freda in Westlands. She took me to her Church – Parklands Baptist. On the Church Bulletin was a book launching of “Dare Be You,” by Winnie Tanui. I attended even though I did not know her. One of the speakers was her mentor, James Karundu. He became my mentor and I joined his “Aspiring Authors Class.” It was a tough journey. I told Him that I want to write about the love and goodness of God. He told me to write a roadmap. I tried and tried to write that outline but I could not. He told me to just write what is in my heart, I felt so good when I got permission to just write.

It just happened. At night when in deep sleep, the Holy Spirit would take me to a scene in the Bible. Like in the temple when Mary Magdalene was caught in adultery. I see Jesus teaching in the temple, then Mary is dragged there, half-naked. Her partner is free. The Pharisees and the Scribes are accusing her to Jesus “Moses said we stone such to death. What do you say?”

My full attention is drawn to Jesus, Who stops preaching. He stoops down to write on the dusty floor. What He writes, I permit myself to read. The Pharisees also read and one by one, they take off. Because of the words of Jesus, “He who is without sin, let him throw a stone at her first.” And who is without sin?

I too drop my stone, because prostitution is according to me, robbery without violence. But I don’t want to leave like the Pharisees. I want to hear the Saviour say, “Neither do I condemn you. Go and sin no more. Right there I get to learn, that He came to save, not to condemn. He came to love not to judge. Capturing that gentleness of Jesus, the forgiving love, His graceful attitude, the power He has of setting the captive (me) free! That is what I write when I get up in the morning!

So in the morning, I searched the scriptures. One scripture led me to another. It was so easy, so enjoyable, even my grandmother’s prayers, hymns, and sermons crept in. At times, I would stop writing and worship God in song, spirit, dance, and even silence in amazement of this Love that came down in the Person of Jesus. Then I would stop worshipping and continue writing. God is at work in my heart in this book. If it was written by someone else, I would buy it and read it severally, faithfully, and diligently. It is very heartwarming to read about the Love of God in Christ Jesus and it is liberating!

Sometimes, I did not get the material to work on in the night. So I would use my creativity to continue writing because Mr. Karundu would demand the work for that week. Later I would realize that my creativity is so foreign. It does not belong there and so I would delete it.

The dream coming through
By the end of 2019, Mr. Karundu handed me over to Mercy Muthoni Omukhango and her team for publishing. She told me that the book had no conclusion. And I thought, “Must every book have a conclusion? Why? I remembered that I am not the publisher. So I set out to write the conclusion. It became a new chapter. I started again, it became another chapter. I wrote 4 new chapters in place of the conclusion.

I told my friend what is happening to my book. She told me that it was not ready for the publisher. She annoyed me and I did not talk to her anymore. Long story short, I wrote the conclusion and quickly wrote “the end” thereafter. Then Mercy told me to reorganize the book into 4 or 5 sections; because it was all mixed up and very difficult to read. It was like writing the book all over again. I didn’t have the energy, taking me one month break. I realized that Mercy is right. So I went back to the scriptures to see how they relate to one another in the Bible. Also which event happened before the other.

I put the healing events together, salvation, restoration, and redemption. I felt very good because there was an order in my book. When I posted it to Mercy, she replied, “Very good”. Later I received comments from the editor. It was so good. She made me understand myself better. She understood my message more than me, quite overwhelming.

From her, I learnt that the message from my heart is communicated to the reader. She even changed the title of the book from “Jesus the Good Shepherd “ to “The Grand Love Story Of All Time.” She even called it a Work of Love. For all this, I am deeply grateful. Besides that, I realized that I am poor in design. So we wasted a lot of time. Finally, I gave up and allowed the designer to exploit his potential on the cover page and designing the book. Am very happy with what I got. Long live CLC. God bless you indeed.

Vote for my book: https://africanauthors.net/nominee/the-grand-love-story-of-all-time/