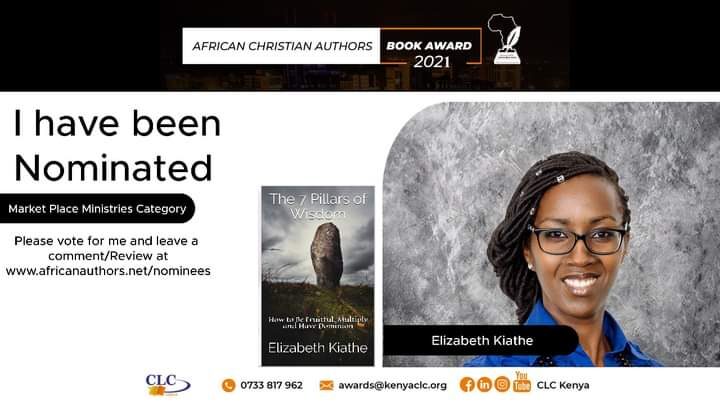 Failing to top my class was betrayal to my gene pool
My name is Elizabeth Kiathe, born and raised in Nairobi to a doctor/lecturer for a father and lecturer for a mother. For now, I am a mother to two beautiful children; Ethan, an international footballer in the making, and Elaine, a pilot currently enthralled with gymnastics (I speak their prophetic destinies). Professionally I am a serial entrepreneur with businesses in Insurance, in Early Learning education and now venturing into authorship. I am best at ease around numbers and graphs holding a BSc. in Actuarial Science, Insurance Proficiency, and MBA, but still hold dancing close to my heart even though for now, my children now are my only audience.

Growing up, I was a student topping my class was not only mandatory but would be a betrayal to my gene pool! So I grew up being at the top of my class. I met Jesus as my savior at the age of 8. My elder brother and I had been sent on a quick errand to the local shopping center to buy bread and milk for the next day. It was back in the days when you could send children off without fear of abduction and other ills. We found a crusade on the roadside and stopped to listen, and when the altar call was made, we both went forward without a word.

The door had been knocked, and we were going to let Jesus in. When we ‘came to’ and remembered our errand, it was dark and we knew what would be waiting for us at home. We got good hiding that night before bed but we did not seem to mind, I don’t recall either of us shedding a tear because the joy we had in us was unexplainable and overflowing. Four years later I find myself in a boarding school many miles away from home waiting to sit for the end of primary national exams. I had moved to many different schools while in the primary. My father was a firm believer in not staying somewhere too long if he felt I was too comfortable at the top of my class. On this particular day, it was break time, and I was sitting at the edge of the school field watching others play, and my English teacher walked by and asked me why I was seated there. Even though it was break time, I found it quite puzzling. He then said to me, “Elizabeth, you know you could be top of in country comes the national exams, but only if you choose to do something else while others are playing. Why not take some time to read?” Those words found a chair somewhere in my soul and sat down and would not be moved, later on that night, I could not sleep. I woke up at 4 am and took a walk to my class and sat at my desk with the hopes of studying but chose first to read my bible. This would the first time I would hear from God. He led me to a scripture and told me to underline it. He then re-spoke the words of the English teacher. He said I would be the top pupil in the country and that in exchange I was to give my life to His service.

Emerging a winner to facing trials in high school
A few months later I woke up to my father screaming at the television as the results for the national examination were being announced. I was the top student in the country. I was then invited to what was considered the top girl’s national secondary school, an MP came forward to pay my fees for the next four years, and newspapers called back to back wanting interviews. One particular picture from the Nation Newspaper the next day had my father front and center and a smile so wide he looked like he would burst with joy. I was at the edge, half my body cut off, and my hair was not well combed due to the whirlwind that had become my life. But then all hell broke loose, I lost my name overnight, and people including my relatives began to call me ‘Kenya one’. It was as though I was not allowed to make mistakes anymore or be a normal teenager. One day the local shopkeeper saw me riding my bicycle and shouted, “Kenya One, mbona uko nje unacheza. Enda nyumbani usome!” (Translates to ‘Why are you outside playing, go home and read!) And overnight what should have been joy turned to resentment. I went into high school with rebellion brooding in my being. I would skip classes when I could and go for anything ‘anti-intellectual’. I joined the Drama Club and my dancing bloomed, I was an avid cheerleader for the basketball team. During the holidays I sneaked out of my parents’ house at night and went dancing in clubs despite being underage. I was so obsessed with music that I was appointed the entertainment captain. The headmistress who thought she had found an intellectual gem was dumbfounded. I was no longer top of the class but by God’s mercy, still an ‘A’ student. The gifting’s of God are without repentance!

In my third year of high school with yet another national exam coming up, I was seated in class absconding yet another lab lesson. A teacher from a different class came by and began to speak to me. She told me that she could see that I was not interested in learning but if I could just hold on to do well for the national exams, the certificate with good grades would open future doors for me. “Do not ruin your future for a few simple years of rebellion.” Those words too found a seat in my soul and took a firm seat. They reminded me of my English teacher years back and my conversation with God. I later went on knees with repentance and weeping because I had abandoned a covenant I had made. I returned to the Lord to seek his way for my life.

The journey since has been amazing in my sight. I dedicated my dancing to the Lord and joined a Christian Dance group after high school during the break before University to avoid my previous lifestyle. Our troupe would end up being the National Star search winners that year. I had taken up publishing my poetry on a poetry site abroad after high school and something I had submitted during that period allowed me an invitation to go to America. The night before my Visa appointment, my invitation letter would strangely disappear. But my mother for no known reason would place the picture of my father grinning in the Nation newspaper in my file and send me off for the interview anyway. The first thing the gentleman consular saw was the picture and he never asked me for the letter. He was so impressed at my seeming intelligence that he gave me my visa approval in seconds.

A scholarship that almost turned into a nightmare
Many years later, a marriage and two kids later, a cousin would share a Masters’s opportunity through the Irish Government and again, words that took a chair and sat and would not move. I applied with less than a month to read and take the GMAT but came out top of the applicants, getting a fully-funded scholarship. Two weeks to my date of departure, I came down with tuberculosis disease and was informed that no one could take an international flight with my diagnosis until six months of medication was completed. A meeting was called to debate if the scholarship should be passed on to the next best applicant. An exception was made to allow me to start school a month late after several weeks of medication and testing proved I was non-contagious – an exception the Embassy or school had never made. I made it to Ireland.

The notes making up the book came to me while I was in Ireland. It was through my own experiences that God opened my eyes to what a man can do when he begins to understand that there is a work that he was created to do beyond salvation; should he choose God’s leading, then he finds the path of exceedingly, abundantly above all that he can imagine due to the power at work from within him. What you are is not unknown rather, it does not exist in your understanding as yet. Over and over again, God has led me through the bible and men to opportunities and places where particular ‘gifts’ given to me along life’s journey have opened doors that would otherwise remain shut. I could recount many more incidences of amazing ‘happenstance’ but that would be a whole other book!

Withinside of my book
My book is ‘How to be Fruitful, Multiply and have Dominion’. God would show me how success is not just intellectually based – that is just His preferred path for me. However, he created men to find great success whether they bake cakes, sing or shine shoes. All men are pre-destined and what that means is each man has his unique path. It is on that path, God has provided everything required for life and for godliness – including people and places to guide you to the next level (teachers, mothers, friends). Where all things work for good; the path is not without trouble but in it is full grace to overcome. He said to me that many men after having found salvation are seeking God’s grace for their life to fully operate while they are on another path never formed for them and wonder why success is elusive. The book of (Genesis 2:5) “Now no shrub had yet appeared on the earth and no plant had yet spring up, for the Lord had not sent rain on the earth and there was no one to work the land……Then the Lord formed a man from the dust of the earth.” Man is formed from the very up earth where he is assigned to work; you are made of the very essence of your place of assignment, and when a man finds his place, God sends His rain not before. You are fearfully and wonderfully made; your physical traits, personality quirks, intellect are all so brilliantly crafted to make you fit in your spot. Nothing is a mistake.

The book takes us through the story of creation in Genesis and therein, the outlines of creation; A guide for us to also create in the likeness of the one who made us. All you will ever be is already written, hidden in plain sight for the man of understanding to seek it out – In the bible, in people around us, in books just like the ones presented here.

So I celebrate every author in this group of ACABA because I know that your book is a light for another man. It may not be all men but the pre-destined ones will find it because of your obedience and you have been a good and faithful servant! God bless you all. Here’s to wishing you all a life of fruitfulness, multiplication, and dominion!

My book is available as an eBook on Amazon: https://www.amazon.com/s?k=the+7+pillars+of+wisdom+kiathe&ref=nb_sb_noss

Vote for my book: https://africanauthors.net/nominee/the-7-pillars-of-wisdom/