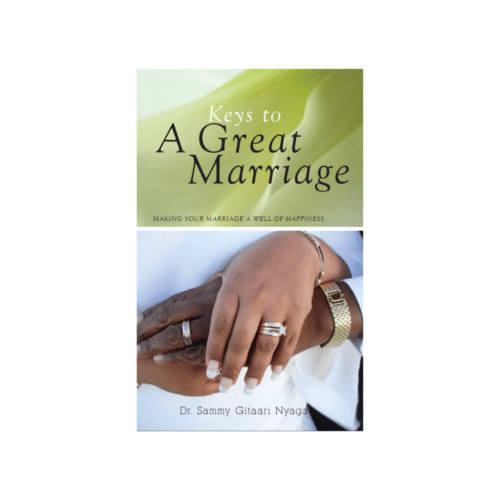 My name is Sammy Gitaari, the presiding Bishop of Gospel Celebration Church. I am a preacher and teacher of God’s Word, with a passion for family, Leadership development, and Clarification of the Gospel of Jesus Christ. I am married to Rose Gitaari since September 1, 1984. We have two living children, Timothy and Grace. Our firstborn daughter, Salome, went to be with the Lord when she was 11 years in 1997. We still miss her – she is certainly part of my family. I trained and taught Mathematics and Chemistry, before turning to theological education and church ministry. I have been a lecturer in a few colleges for some years and continue as an adjunct lecturer in one.

Passion for family and motivation for writing
When I got saved in the year 1977, I admired the writing of the late Billy Graham, Gordon Lindsay, Oswald J. Smith, and T.L. Osborn. As a baby Christian, I started praying, “Lord Give me an anointed pen”. I have no idea why those particular words but I prayed like that for about ten years. I don’t know when the prayer was answered but I stopped praying that same prayer around 1987, 10 years later. By then I had attended some writing courses and started editing a denominational magazine that came out bimonthly.

In 1988 I asked God for a ministry that will benefit his church beyond my congregation. One day He said, “If you build strong families you will build strong churches; if you build strong churches you will build a strong nation”. That is how my passion for the family was born. Since I did not know anyone doing anything for the family I got to libraries and read few hundred books on family. I studied courses on family, namely, “Christian Marriage”, “Marriage and Family Counselling”, “Biblical Counselling and Marriage Counselling”. I finally wrote a master’s project on “Marriage Seminars” in 1988.
You would think I felt confident doing seminars and counseling, but I was scared to death. I only had certificates and no experience.

I did my first marriage seminar in 1988 when I was only 29 years old. About 200 people attended, all of them older than me. The subject of the seminar was “Resolving Marriage Conflicts.” I was embarrassed speaking what people did not speak in church, yet I was invited to more than 20 similar seminars in the months that followed. Since then I speak about family freely and without fear at least twice every week.

After a few seminars, people came to me and asked, “Where is the book of the subject you are teaching, Pastor?” This became the trigger for my first book “Resolving Conflicts in Marriage”. My “mzungu” (white) publisher stayed with the manuscript a whole year and wrote these words in red, “Not publishable and if published, can’t sell.” The manuscript was rejected and I did not know what to do because people did not do self-publishing by then. However, I figured out that I already had a ready market from people who were demanding the book and so it could sell. I may not have written the way the publisher who rejected my manuscript wanted but I write for my people, the people that come to listen to me!

My rejected book later pulled a surprise
The kind of man I am, I don’t take no for an answer. I went to Kirinyaga Road and printed 1,000 copies of the same book and sold them all in a few days. I Got a better printer and did 3,000 copies, they sold quickly. By the time I sold 9,000 copies of the book, the same publisher (different officer) took over my book and it became their “best seller”.

This and other similar incidents in life have made me come to the following guiding statements for my Life:
a) Those who say it cannot be done, are usually interrupted by others doing it.
b) All you can do is all you can do, but all you can do is enough.
c) Don’t tell me It can’t be done.
d) I can do all things through Christ who strengthens me.

After teaching Christian Marriage, and Marriage Counselling for various schools and colleges over many years, I ventured into radio and did “Jamii Ya Mkristo” (Christian Family) for an hour per week for several years, Family Talk, 30 minutes per week, and writing a monthly column “Family Talk” for a Christian Magazine (Revival Springs), my second marriage book was conceived, “Keys to a Great Marriage”. It is a Marriage Course and Basic Marriage Counseling condensed into a few pages.

I am a preacher and love developing preachers with excellence on the pulpit. While teaching a master’s class on Principles of Preaching, I found out that while my students were highly educated, they could not articulate the message they preached. I asked them what they preach, and they used bombastic terms to describe what they preached but nothing was clear. We agreed I share the gospel with them for 15 minutes in 15 days outside class time. I saw the change in my students and wondered how many Christians are unsure of what they believed? That was the birth of my other book, “Amazing Freedom: Freed to Be Free.” It is a basic clarification of the gospel.

Change what you don’t like
One of my frustrations for years was going to Christian Bookshops in the 1970s, 1980’s, 1990’s and find only one or two titles by African Writers. I complained about it for some years until I realised if you don’t like what you see, the right thing is to change it. I started writing but the writing was one way a Kenyan could get poor. I printed a few books and I did not like the experience. I would commit Kshs 500,000.00 in publishing a book and take three or so years to sell the books. At that rate, you cannot fill bookshops with books. I had written five books and were completely worn down by costs.

I had a conference with myself over a cup of coffee at Java someday. My question was If I have a call to write and I don’t doubt it, Why am I so stuck? I figured I needed to have printed at least 30 titles by then. That would take millions of shillings to do, which I did not have. “What is eating me?” I pondered. Then God gave me an idea to call one of my spiritual sons and charge him with the responsibility of getting 30 of my books in bookshelves without killing me financially. One week later we were back at Java for another cup of coffee. He was sure he landed on the answer, that is, print on demand. Now, I knew publishers like Amazon, which is 1,000’s of miles away did that. After our coffee, we drove to Kilimani to meet a man he wanted to introduce me to and that is Patrick Omukhango of CLC Kenya. That was the game-changer as self-publishing, and print on demand is possible in Kenya. My 30 titles dream is on course, now I have 16 titles in the market and manuscripts for the others.

Check on my book here: https://africanauthors.net/nominee/keys-to-a-great-marriage/ and

Both books goes for Kshs 990.00 are available in Keswick bookshops, Amazon.com, and CLC bookshops.